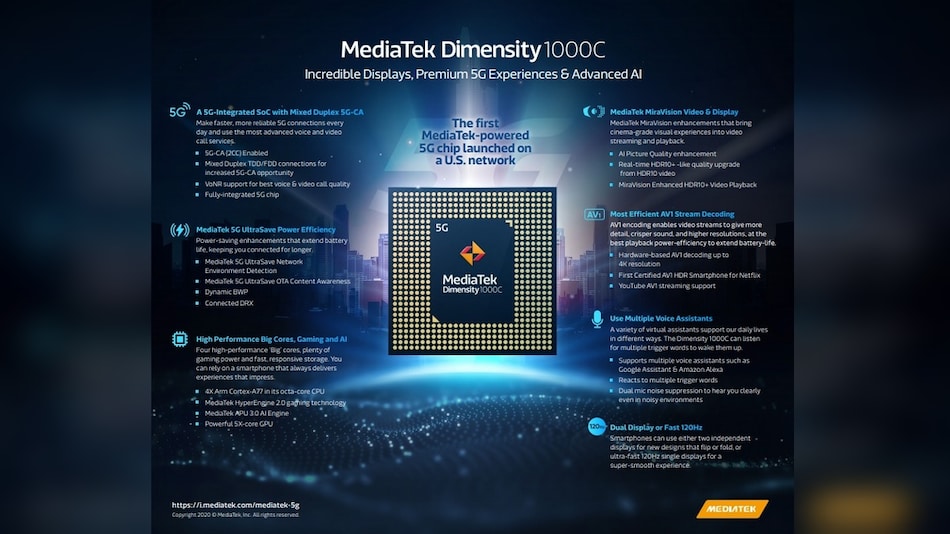 MediaTek Dimensity 1000C mobile SoC has been unveiled as the newest entrant in the company’s 5G chipset portfolio. The company says it delivers advanced AI capabilities, enhanced display features, and premium 5G experiences. Additionally, MediaTek has also announced that the LG Velvet – the “first MediaTek powered 5G smartphone in the United States” – will be available on T-Mobile’s nationwide 5G network with this new SoC. It will be available in the US starting September 10 and T-Mobile is offering a monthly payment option.

This octa-core SoC comes with four Cortex-A77 cores and four power-efficient Cortex-A55 cores clocked at up to 2GHz. The graphics are handled by the five core Mali-G57 GPU. The MediaTek Dimensity 1000C supports up to 12GB of LPDDR4x RAM clocked at 1,866MHz and USF 2.2 storage. In terms of camera support, the Dimensity 1000C can handle up to a single 64-megapixel sensor or up to a 32-megapixel + 16-megapixel setup. The maximum capture resolution for this SoC is 3,840×2,160 pixels.

For connectivity, the Dimensity 1000C has integrated 5G support with Mixed Duplex 5G-CA. This allows for seamless handover between two 5G connections. It comes with support for TDD+FDD, TDD+TDD, and FDD+FDD with North American carriers. You also get 4G support, 4×4 MIMO, Wi-Fi 5 (a/b/g/n/ac), and Bluetooth v5.1.

The MediaTek Dimensity 1000C supports AV1 video hardware decoding with Netflix and YouTube for better playback at higher resolutions, as well as power-efficiency. It can handle dual displays for flip or fold phones, or a single 120Hz display with up to full-HD+ resolution. Additionally, it can listen for multiple trigger words to wake up virtual assistants like Google Assistant and Amazon Alexa.

It was also announced that the T-Mobile LG Velvet will be powered by this Dimensity 1000C SoC and T-Mobile has revealed the phone will go on sale in the US starting September 10. It is priced at $588 (roughly Rs. 43,000) in the country.