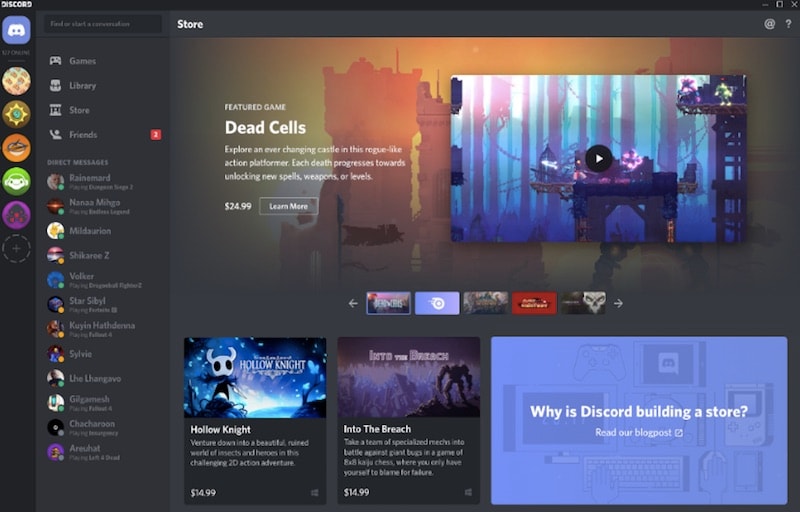 Hot on the heels of the Epic Games Store offering 88 percent revenue share to developers and Steam changing its profit sharing depending on the number of games sold, Discord has announced it will be giving developer 90 percent of revenue from games sold to developers. Late last week the company took to its blog to announce the news. This follows the global launch of the Discord Store for PC games in October.

“Turns out, it does not cost 30 percent to distribute games in 2018,” a post on the official Discord blog reads. “After doing some research, we discovered that we can build amazing developer tools, run them, and give developers the majority of the revenue share.”

It sounds like Discord hasn’t taken into account the costs involved in making these “tools” to begin with. The post goes further, stating it would release a self-serve game publishing platform next year.

“So, starting in 2019, we are going to extend access to the Discord store and our extremely efficient game patcher by releasing a self-serve game publishing platform,” the post continues. “No matter what size, from AAA to single person teams, developers will be able to self publish on the Discord store with 90 percent revenue share going to the developer. The remaining 10 percent covers our operating costs, and we’ll explore lowering it by optimising our tech and making things more efficient.”

Interestingly, it doesn’t take into account any curation needed to avoid content concerns like we saw with Steam. Instead Discord plans to double down on what it refers to as developer empowerment.

“We will also empower developers to communicate with their players by improving Verified Servers, extending their ability to add great content to the Activity Feed, and more,” the post reads. “We believe if we iterate and work with developers, we can reverse platform fragmentation in the game industry while connecting developers and players closer together.”

It will be interesting to see how this plays out in 2019. While Discord and its ilk offer better revenue, they don’t have the feature set that Steam has, making it a non-entity for most gamers.