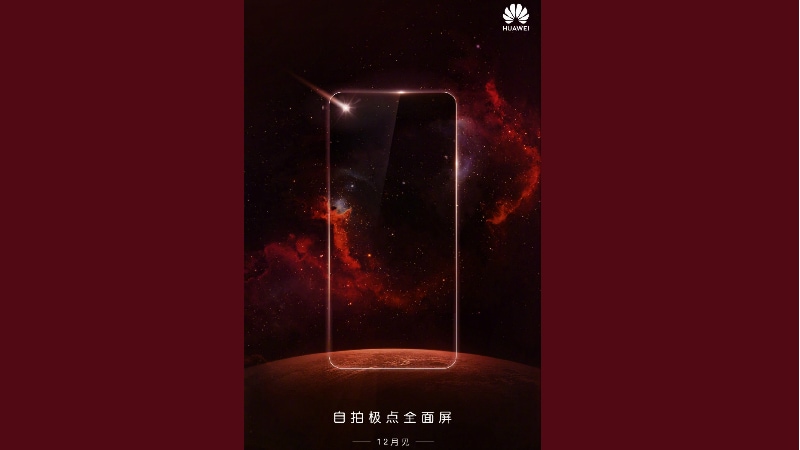 Huawei recently launched the Mate 20 series in October, and now the company is gearing up for a new smartphone launch next month. The Chinese giant has rolled out a teaser poster confirming the arrival of a smartphone. The poster reveals that the smartphone will come with a full-screen display without any bezel or notch. The screen instead appears to come with a small hole on the top edge for the front camera – similar to the long-rumoured and recently confirmed Infinity-O display tech from Samsung. Alongside the poster, Huawei has confirmed that the smartphone will launch next month in China.

To recall, Samsung is also expected to launch its Galaxy A8s in December, and the leaked renders of the smartphone suggest that it will also sport a display with a small cut out for the selfie camera. Samsung announced its new display plans back at SDC, with the Infinity-O type display featuring the hole design.

Huawei looks to compete with Samsung by launching a new smartphone with the same design as the rumoured Galaxy A8s. Huawei recently also released the Mate 20 series giving tough competition to the Samsung Galaxy Note 9.

It remains to be seen which company beats the other to launch the first smartphone with a small hole in the screen. The Galaxy A8s renders suggest that apart from the Infinity-O display up front, the smartphone has a triple rear camera setup and a rear-mounted physical fingerprint sensor.